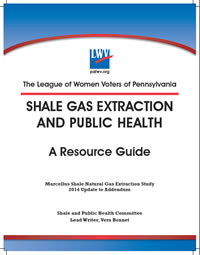 This Resource Guide on Shale Gas Extraction and Public Health is an Addendum to the original Marcellus Shale Study Guides developed in 2009-2010 by the League of Women Voters of Indiana County. The Shale Gas Extraction and Public Health Resource Guide was developed and researched over months in 2012-2013, written and edited in 2013 by Indiana County League member Vera Bonnet, who served as Lead Writer and Editor. Members of the Shale and Public Health Committee of the League of Women Voters of Pennsylvania, and additional members of the Indiana County League, contributed to the research and study, development, writing and review of the guide. We have updated the Resource Guide in 2014 to include new research and reflect the evolving knowledge base.

INTRODUCTION
In the United States, the practice of drilling before consultation with public health officials is standard procedure. Unconventional drilling for natural gas is no exception. The public is increasingly aware of the potential for degradation in the quality of water and air in the vicinity of unconventional gas extraction, and as a result, more people are beginning to raise questions about the risks of unconventional natural gas development to people’s health. Yet there is still a great deal of confusion about the workings of the gas and oil industry and therefore about the risks of these new developments in shale gas extraction. Drilling, extraction, processing, transmission, transportation, storage and distribution are all part of
unconventional gas industry operations. The lay-person generally lumps these together as “fracking.” Industry tends to use a very narrow definition of fracking, preferring the apostrophized spelling (frac’ing) to distinguish this specialized usage. Fracking is thus reduced to a “little act . . . that helps enhance the production of a well” (quoted in Hood, 2014). In the same vein, a recent headline covering an article by AP Science Writer states, somewhat cryptically: “Research: Leaky wells, not fracking, tainted water,” (Borenstein, 2014), effectively separating issues of well integrity from problems resulting from the actual fracturing process.

These esoteric lexical distinctions are lost on people whose health is impaired by a nearby industrial facility. The average person does not distinguish between each operation, even though each operation has potential consequences for human health — and the health impact of each operation varies depending on numerous factors. While each operation may be carried out by specialized industry sectors, all these sectors, together and individually, are accountable for the safety of those who live, work and attend school in the affected areas. In keeping with the public’s perceptions of the industry, this guide uses the word “fracking” to cover all aspects of the production of gas using unconventional drilling techniques. Taking a comprehensive approach to the problem, we will discuss not only direct impacts on the general public, but also worker health and safety issues, psychological impacts, community health, and potential short- and long-term impacts on the environment.