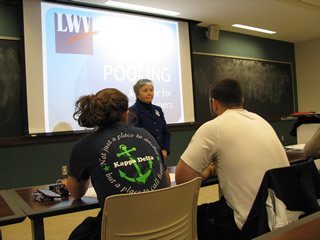 MERCER COUNTY AREA — A former board member of the Pennsylvania League of Women Voters who’s been traveling the state to educate landowners about pipelines and related gas and oil drilling issues recently spoke to local groups, encouraging them to do more research.

Winters on Nov. 2 presented “Pipelines and Pooling: Expanding Natural Gas Issues” at two seminars sponsored by Westminster College’s Environmental Programs and the League of Women Voters of Mercer County; one was held at Westminster in New Wilmington and the other at the Mercer County Cooperative Extension in Coolspring Township.

Winters is also a retired elementary school teacher and holds a bachelor of science degree in biology from Bucknell University, a master’s degree in science education from Harvard University and a doctorate degree in educational leadership from the University of Pennsylvania.

She feels well-equipped to help the public understand Marcellus Shale operations and issues like pipeline infrastructure, and her teaching background means she can explain those complex topics in easier terms, Winters said during a phone interview.

About 40 people turned out for her Westminster talk and about 25 for the Cooperative Extension seminar, she said, adding anyone who had a question was asked to write it on an index card, which she said is a format that makes people feel more comfortable.

Winters spoke about pooling of leased land, which reduces landowners’ ability to negotiate. Pooling means that the well operator has the right to develop multiple leases at the same time, so hiring a lawyer to check out a lease before you sign is very important, she said.

“In other words, the landowner has no say,” she said of pooling.

Pooling is a simple issue compared to pipelines, which Winters said are the safest way to transport hazardous material.

“But we can do better,” she said of regulating the pipelines.

They are regulated by many agencies, but those agencies don’t always collaborate in a way that best serves the public, Winters said.

A big problem in rural areas like Mercer County is that some of those pipelines could operate at high pressures of more than 1,400 pounds per square inch, but rural areas are “totally unregulated,” she said.

“If they drill wells, there will be pipelines,” Winters said of more pipelines being built.
There’s no oversight – people don’t know where existing lines are located or how they’ve been constructed, which would be dangerous in an emergency situation.
Winters is also concerned that many people wouldn’t know how to recognize natural gas leaking from a pipeline because there isn’t always an odor; sometimes there’s a hissing noise or dead vegetation near the leak. 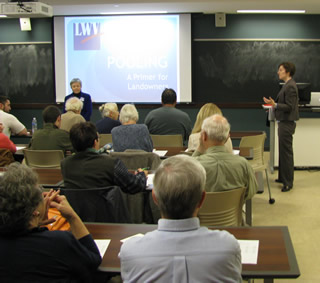 nd people aren’t always aware of ignition sources,” she said, adding that includes cell phones, lawn mowers and motor vehicles, which can set off fires or explosions if there’s a leak.
There also needs to be more oversight and regulation for compressor facilities in rural areas and the pipes on drill sites connected to well pads, water supplies and wastewater, she said.
Landowners and residents need to stay informed, do their homework and talk to their elected officials, Winters said. She also recommends emergency responders consider specialized training for natural gas problems because now is the time to prepare.

“It calls for greater training and awareness,” she said, adding there are grant opportunities for that training.