The Straight Scoop on Shale 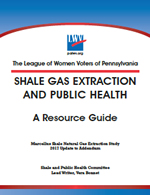 The fifth annual Shale & Public Health Conference was held November 13, 2017.
Presented by the League of Women Voters of Pennsylvania, hosted by the University of Pittsburgh Graduate School of Public Health